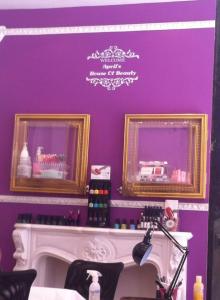 So this weekend I was lucky enough to be invited on my lovely friend Deborah‘s hen party.

Being down south, the beautiful bride-to-be kept things local, with us going on our day activities in Southampton and then getting a mini bus to Winchester, Deborah’s uni town, for the evening.

We started off the day going for a gorgeous afternoon tea at the Southampton’s Dolphin Hotel. We had the tea in the main dining hall, which was lovely and our table was gorgeous laid out with white covers and little bows on the chair.

As soon as we sat down we were asked whether we wanted tea and coffee and were then bought out a jug each of our chosen drink! Shortly after the food arrived and were weren’t disappointed. There was a whole tray of salmon, cucumber and ham and tomato sandwiches to share between four of us and a whole cake tray full of yummy treats.

I had only had a small bowl for cereal really early in the morning meaning by this time (1pm) I was really hungry. So, let’s just say I didn’t hold back in digging in. I had about five sandwiches and around eight of the cakes, which were such delights as chocolate eclairs, cream puffs, scones with cream and jam, profiteroles and chocolate and raspberry tarts. Honestly I don’t think I’ve eaten as much sugar in one sitting as I did, but it was all really nice.

The afternoon tea cost us £12 which was really reasonable for what it was. As I said, the room was beautifully decorated, there was tons of food and the hotel staff were extremely attentive. As soon as we even got halfway through our jug of tea or coffee they were asking to re-fill it. All in all I would definitely recommend the Dolphin Hotel for an event or treat if you are nearby.

After the tea, we walked just along the high street to April’s House of Beauty for some pampering. The maid of honour gave us three options to choose from (as they were all reasonally priced), these were a manicure, a pedicure and a hand wax treatment.

Now, I know what you’re think after reading that last sentence… ‘hand wax?’ It’s not like it sounds! Basically they put a wax treatment on your hands, which makes your hands super, super soft after they’ve left it on for half an hour.

I went for the manicure however and had a lovely deep burgandy colour painted on. Whilst we were having our treatments, we were all drinking prosecco that we were allowed to bring with us, so it was extremely relaxing! These three treatments are all priced at £10 each, however the salon also does many other treatments such as massages and eyebrow threading to choose from. The staff were so lovely, so again if you are local and looking for a beauty salon, I definitely recommend April’s House of Beauty.

Finally after getting back to the hotel, getting glammed up and playing a few hen games, we headed to The Gourmet Pizza Company in Winchester. The restaurant is quite quaint so it was perfect for us as it felt very private and like our own little venue for the evening. The menu was your typical Italian menu, which all the usual favourites such as dough balls, garlic bread, lasagne, pasta and pizza, of course. I opted for bollognese tagliatelle and got the biggest plate ever, I think I only could manage around half of it! The staff were really great at the restaurant, especially as we started playing a loud singing game and got some silly moustaches out, but they didn’t seem to mind.

After the lovely food and and plenty of bottles of wine we were back to the hotel to chat for a bit and to call it a night. All in all it was a lovely day and definitely one of the more sophisticated hen do’s which was nice as it was really relaxing.

Hope you’ve enjoyed the post and got some inspiration if you are planning a hen do yourself!

P.s. You can check out a few of our snaps from the hen do below… 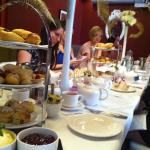 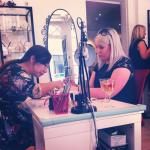